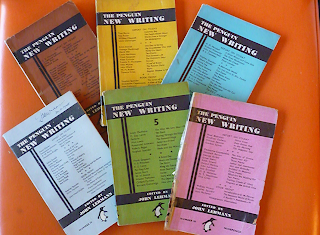 Penguin Books began publishing a small magazine edited by John Lehmann in 1940 containing essays and short stories. Some of the titles in Volume I were "Shooting an Elephant" by George Orwell, "Sense of Humour" by V.S. Pritchett and "Conversation with a Lama" by Ralph Fox. The latter one has a location with the Mongols on a Steppe.  This must have seemed quite exotic at that time.

Every now and then I will come across one of these delightful little books and I always pick them up. Though I must say they don't show up very often.

Another lovely thing about them is they were published with covers of various covers. Pink, green, yellow, red and bray are the colours of the ones I have.

For interest I am including a bit from the Forward of Vol. II that gives some insight into the thinking of the day. 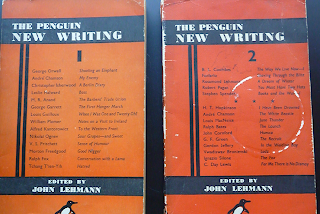 The first number of The Penguin New Writing was launched in the autumn of last year, and in a very few weeks more than justified the belief I had long held,and which Allen Lane had shared with me, that the magazine was capable of appealing to a far wider public than the original an dmore expensive volumes could ever reach.  This is only the second number; but the success of the first has already encouraged us to enlarge its scope and to turn it into something which, we think, is entirely new in journalism and meets an urgent demand of the times."  by John Lehmann, Penguin New Writing Magazine Vol 2, Jan 1941.

The magazines number in my inventory are listed below: 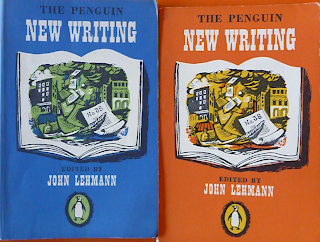 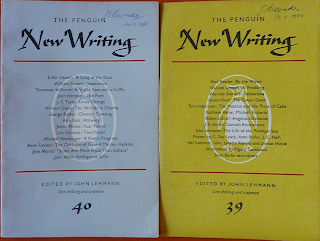