For a long time I collected Penguin boxed sets.  Now it seems Penguin doesn't bother with a box anymore and sells the books within a series individually.  I like the illustrations and designs of the vintage boxed sets as well as the newer one but have slowed down finding any more.  I always enjoy hearing about the sets I don't have, if only to have a look at the design.

The sets I currently have in my collection are listed below.

There were several small orange boxed sets with 10 books per set.  I often find the individual books for sale from the sets and some unknowning book sellers will sell the actual sets with the wrong books in them so if you want a correct set be sure to check them. (For example a travel book might be in the biography set). 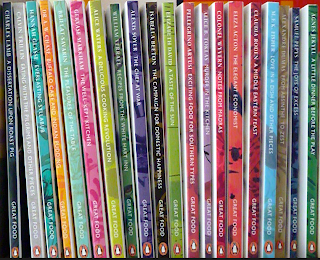 Posted by Travellin' Penguin at 21:24